Nokia takes the wraps of the Lumia 920 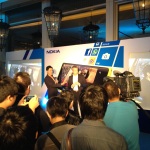 I’d almost forgotten what product launch press conferences were like in Asia, but got a nice little reminder at Nokia’s grand unveiling of the Lumia 920 and 820 in Hong Kong last Thursday.

I have less than pleasant memories of the rugby scrum at Computex that formed after master showman, Asus chairman Jonney Shih, took the wraps of the Padfone.

“Is it a laptop? Is it a phone?” he teased, unaware that the vast majority of the audience couldn’t make an informed decision because of being unable to see anything past all the sweaty fanboys standing on their chairs.

It all came flooding back at the French Window, a swanky restaurant venue in the IFC Mall, on Thursday night. To describe the scene for you: lots of people talking over Nokia’s spokesperson and the over-exuberant local media star roped in to present the devices, no-body drinking.

After some barely audible back and forth and a play around with the new Windows 8 Phones, it was time for the money shot, namely the part when three attractive, scantily clad female models come on stage to hold the devices for the cameras … at perfect boob-height.

So does Nokia have much of a chance with the Lumias? Well I gave up trying to fight may way to the demo area, but smartphone fondlers in the media regard it as one of Nokia’s best for years: great build quality, blisteringly fast processor and superb camera, if a little bulky.

Wireless charging, which was demoed at the event, will also be a bonus and, of course, it comes with Windows Phone 8.

I like Nokia, I really do, and would love the European tech giant to get back on track with this one, it’s just that with so much competition, and with so many smartphones these days offering specs which are so similar, I wonder if it will be enough, especially in the hyper competitive China market.

If you’re a Windows Phone fan, happy days, if not, you may well be minded to stick with what you know.

Bruce Schneier: the internet is not doomed, but it is fragmenting

Schneier, if you haven’t come across him, is BT’s chief security technology officer, author, cryptographer extraordinaire and philosopher-cum-infosecurity out-of-the-box-thinker.

Basically, what he says in info-security circles is usually listened to, although his propensity to tackle the subject more from a socio- or even biological perspective than a mere discussion of bits and bytes can make quotable extracts from a conversation with him pretty thin on the ground.

That said, Schneier was on form last night, focusing on the topic of trust and the notion that all systems, be they sociological, biological and so on, need co-operation to work. These systems also feature, inevitably, ‘defectors’, who don’t obey the rules and require security to keep their activities to manageable levels.

All fine and dandy, but what about the future? Does Schneier think we’re all doomed?

Well he certainly believes that the gap between the bad guys profiting from new technologies and the good guys catching up is greater than at any point in the past thanks to the sheer volume of new tech and the huge social change it is spurring, which is somewhat worrying.

However, there is hope that all is not lost. For one, he declared the bad stuff that happens online still a “tiny percentage” of the whole.

“I’m a short term pessimist but a long-term optimist,” he added.

As the older generation dies out things will gradually change too, he explained, as new norms around things like privacy come into play, and even the music industry is eventually be forced to change.

“The internet is the greatest generational gap since rock n roll,” he declared.

“People stealing music now are doing what will be normal in ten years’ time, they just figured it out first. The business model of scarcity doesn’t work.”

In less reassuring news, he argued that the balkanisation of the internet is likely to continue as national governments seek to establish their own controls – particularly appropriate given we were sitting in the Conrad Hong Kong, just a few miles from mainland China and the Great Firewall.

“It turns out the internet does have boundaries,” Schneier concluded. “Governments are enforcing their rules more and more and it makes for a less stable internet but it is the geopolitical future.”

China watchers will be well aware of the story by now. Most of the shiny tech kit we buy in the western world is produced in conditions ranging from ‘challenging’ to downright miserable. Apple provider Foxconn is often highlighted as a prime offender but the depressing truth is that it is one of the better employers. As long as labour rights abuses continue, though, they should continue to be reported.

The below is a piece I wrote up from my chat with IHS analyst Tom Dinges:

The supply chain analyst revealed the news as part of a wider survey of the global technology industry.

Over the past year incidents at factories belonging to Apple supplier Foxconn, as well as plants run by contract manufacturer VTech and Samsung provider HEG Electronics, among others, have highlighted the poor level of compliance with local laws at many plants.

Although China has strict labour laws which prevent children under the age of 16 working, keep working hours and overtime to manageable levels and prohibit discrimination, they are poorly enforced.

Not-for-profit groups including China Labour Watch and Hong Kong-based SACOM have time and again uncovered incidents alleging such rules have been broken, with reports claiming physical violence, bullying and filthy living conditions are the norm in many factories.

Staff dissatisfaction comes to a boil periodically in the form of strikes or bouts of violence. In October it was claimed that thousands staged a walk out at Foxconn’s Zhengzhou factory where the iPhone 5 was being made, while a month earlier, scores of workers were hospitalised after a mass brawl at a managed dorm near Foxconn’s Taiyuan plant.

“There are aspects of the labour laws many firms turn a blind eye to for the sake of satisfying their customers and getting products out of the door,” IHS analyst Tom Dinges told me.

“Considering how much of the supply chain is embedded in China it’s too costly to move to another region so the issue is ‘what do we do to ensure our suppliers adhere to the local labour laws they’re supposed to?’.”

Dinges added that the ‘headline risk’ of bad publicity, especially as it filters down to middle America through regional media outlets, should be forcing change on this front.

Foxconn is one notable supplier which seems to be taking a lead on this, having agreed with Apple to on-going audits by the Fair Labor Association, although worrying cases of rights abuses continue to emerge at some of its plants.

China Labor Watch also claimed at a Congressional hearing in the summer that the audit process is flawed in many cases, with widespread bribery and collusion on the part of suppliers and auditing companies.

Dinges said that as the industry matures this situation should improve, with auditors taking their cue from financial investigators.

“These organisations will have to meet a certain expected level of authenticity, vigour and independence,” he added.

“We’re past the stage of hyper growth. Now a lot of what is produced there ends up staying in China. If that’s the case then the factory employee is also a customer and you want to be sure to treat your customers well.”